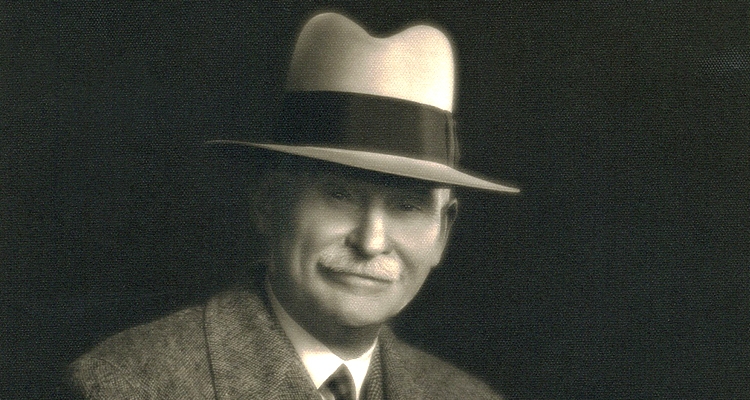 When thinking of legendary people that helped shape Deadwood, one typically conjures an image of Wild Bill, Calamity Jane, or perhaps Seth Bullock. While these personalities are integral to the history of the area, another man arguably created a more tangible, lasting legacy for the city of Deadwood and the surrounding Black Hills. The man was W.E. Adams, the name behind the Adams Museum, the Historic Adams House, and the Homestake Adams Research and Cultural Center. Despite the name having such a dominant presence today, many are left wondering, “Who was W.E. Adams?”

At the age of 23, William Emery Adams and his older brother, James, came to Deadwood in 1877. Together, the two brothers built and operated a grocery store on Main Street, originally called the Banner Grocery. The fire of 1879 destroyed the building. The brothers soon rebuilt and were back in business again.

W.E. married Alice Burhnam in 1880 and together they had two daughters: Lucile, born 1884 and Helen, born 1892. With a burgeoning business, W.E. was able to provide a happy and comfortable lifestyle for his wife and children. The Adams’ changed residences in Deadwood several times, each time moving into a larger and more elegant home.

In 1894, W.E. built a new store on Sherman Street that eventually reached four stories and occupied an entire block. The building came to be known as the Adams Block building. Adams focused less on retail and more on wholesale; creating one of the largest wholesale houses in the state.

Aside from having a successful business, W.E. had a great impact on community affairs. He served six terms as mayor, making great improvements to the city’s economy. He was very involved in the Chamber of Commerce and the Days of ’76 Celebration, which began in 1924.

There is no doubt W.E.’s largest contribution to the townspeople of Deadwood was his gift of the Adams Museum in 1930. W.E. financed the purchase of a lot and construction of the building. He chose an apt location; directly across the street from his Adams Block building. W.E. also had a personal reason driving his desire to build a museum. He felt a museum was the perfect way to honor his first wife and two daughters, who had all passed away prior to 1930.

Adams’ legacy is perhaps best surmised with the dedication found on the family mausoleum, “A philanthropist and a friend to all mankind and through whose generosity Adams Memorial Hall was erected in Deadwood, South Dakota, and dedicated to the pioneers of the Black Hills of South Dakota.”